A scoundrel by moonlight #4 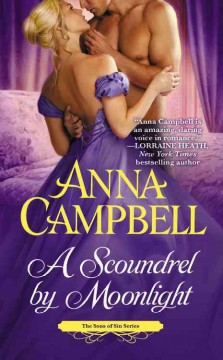 Reviews Author Notes
Always a voracious reader, Anna Campbell decided when she was a child that she wanted to be a writer. Once she discovered the wonderful world of romance novels, she knew exactly what she wanted to write. Anna has won numerous awards for her historical romances, including the RT Book Reviews Reviewers' Choice, the Booksellers' Best, the Golden Quill (three times), the Heart of Excellence, the Aspen Gold (twice), and the Australian Romance Readers Association's most popular historical romance (five times). Her books have twice been nominated for Romance Writers of America's prestigious RITA Award and three times for Romance Writers of Australia's Romantic Book of the Year.

When she's not writing passionate, intense stories featuring gorgeous Regency heroes and the women who are their destiny, Anna loves to travel, especially in the United Kingdom, and listen to all kinds of music. She lives near the sea on the east coast of Australia, where she's losing her battle with an overgrown subtropical garden.